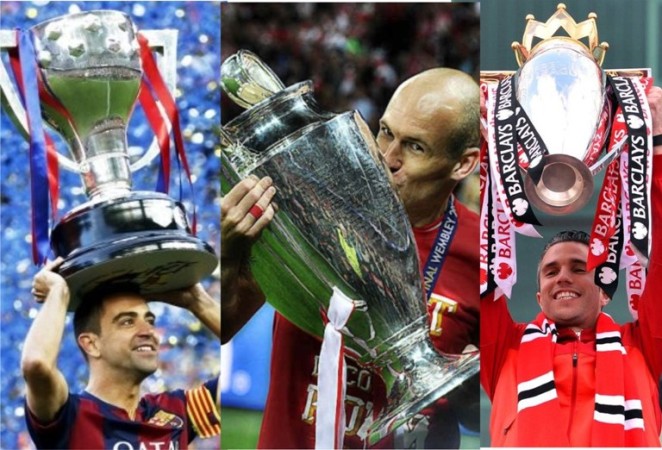 The end of summer of 2019 and end of 2018/2019 football season, saw the end of the careers of some League heroes and club legends, the following players have all hung up their boots at the end of 2018/19 and will go on to be remembered as amongst the all-time greats in the game.

Former Barcelona legend, Xavi retired at the end of 2018/19. Along with Lionel Messi and Andres Iniesta, perhaps no other player symbolises the Pep Guardiola-era Barcelona side that conquered the world more than Xavi.

The Spanish midfield maestro, famed for his incredible range of passing and ability to dictate the flow of the game, spent an incredible 17 seasons at the Nou Camp before leaving in the summer of 2015 to finish his career in Qatar.

During his time with Barca, Xavi practically won it all. Produced by the famed La Masia academy, he broke into the Blaugrana first team in the late 1990s and became a key player under the tutelage of then boss, Louis van Gaal, winning his first LaLiga title in 1998/99.

Xavi won two more league titles as well as a first Champions League under Frank Rijkaard. But, he’ll always be intrinsically linked with the Guardiola regime at the Nou Camp. Barca won a treble of LaLiga, the Copa del Rey and the Champions League in 2009/10, and soon became recognised as arguably the best club side in history.

More trophies followed for Xavi; two more league titles and another Champions League under Guardiola and then the same again under different bosses, as well as the 2010 World Cup and Euro 2012 with Spain.

Since leaving for Qatari side, Al Saad, in 2015, Xavi had largely faded from view, but with the announcement of his retirement this month he should go down as one of the all-time great midfielders.

Petr Cech will go down as one of the Premier League’s greatest ever goalkeepers. Of the five players on this list, Petr Cech is the only one who may yet play one last game.

There’s a chance the Arsenal goalkeeper may appear in their Europa League final against his former club Chelsea, but that feels unlikely given that Cech is reportedly about to make his way back to Stamford Bridge in a technical role as soon as he hangs up his gloves in the summer.

Regardless of his role in the future, Cech will undoubtedly go down as one of the greatest goalkeepers in Premier League history.

Signed by then-Chelsea boss Jose Mourinho in the summer of 2004 for a fee of £7 million, the Czech international immediately broke records by keeping an unbelievable 24 clean sheets across the season in a Blues side that conceded just 15 goals.

Cech went on to win the Premier League title that season and then repeated the feat a further 3 times while at Stamford Bridge, also winning the FA Cup on 4 occasions, the EFL Cup on 3 occasions and in 2011/12, the Champions League.

The final of that competition – against Bayern Munich – saw Cech save a penalty from Arjen Robben in normal time and another 2 penalties in the eventual shootout that saw Chelsea triumph. After the emergence of Thibault Courtois at Chelsea, Cech moved to Arsenal in 2015 and immediately became their first choice keeper, too.

Trophies were harder to come by for Cech at the Emirates but he still managed to pick up one more FA Cup in 2016/17, coincidentally by beating Chelsea in the final.

Despite a less successful end to his career, though, he’ll definitely go down as one of the all-time great goalkeepers – one who was dependable until the very end.

Everyone can predict what he is going to do, but no one can stop him. Robben enjoyed a glittering career at the top of European football, winning a host of trophies for PSV, Chelsea, Real Madrid and Bayern.

It was at Chelsea – whom he joined in 2004 – where he established himself as one of world football’s great promises, helping the club to back-to-back Premier League triumphs in 2004-05 and 2005-06 and an FA Cup win the following season.

His subsequent move to Real Madrid was less successful on a personal level, though he did win LaLiga in 2007-08.

Bayern snapped him up in 2009 and, though injuries were a regular occurrence, he still managed to enjoy a sparkling 10-year stay at the Allianz Arena.

He won eight Bundesliga titles in that time, plus the Champions League in 2012-13, making 309 appearances across all competitions. Despite the injuries, Robben still managed to score 144 times for Bayern, including six in 19 matches in his final campaign.

The winger had been tipped to return to his first professional club Groningen after his Bayern contract expired, but he has since opted to end his career altogether. On top of a glorious club career, Robben also won 96 caps for his country in 14 years, netting 37 goals.

One of the most perfect No.10 in football history. Sneijder began his senior playing days with Ajax in 2002 and went on to play for Real Madrid, Inter, Galatasaray and Nice in a storied career in Europe.

He was a star performer for Jose Mourinho’s Inter side of 2009-10, which won the treble of Serie A, Coppa Italia and Champions League titles.

Sneijder then inspired Netherlands to the final of the 2010 World Cup, where they lost 1-0 to Spain, and won the Silver Ball as the tournament’s second-best player.

His omission from the final three-man shortlist for the Ballon d’Or of the same year was widely considered to be unjust.

Sneijder played 134 times for the Netherlands from 2003 to 2018, becoming the most capped Dutch player of all time.

Robin Van Persie will go down as one of the best strikers of his generations.
Dutch striker, Robin van Persie may not have won as many trophies across his career as other legends – a single Premier League title in 2012/13 and FA cup in 2004/05 stands as his only triumphs during 11 seasons in the Premier League – but arguably, he made the biggest impact of any single player on a side in the history of the competition when he moved from Arsenal to Manchester United in the summer of 2012.

Van Persie played in all 38 of United’s games in 2012/13 as they marched to their most recent Premier League title – the final one under the stewardship of the legendary Sir Alex Ferguson – and scored 26 goals, enough to win him the Golden Boot.

While his first season at United was definitely RVP’s highest watermark, he was also brilliant for Arsenal for the majority of his 8 seasons there, and he signed off his time at the Emirates by delivering a phenomenal 30 goals in 38 Premier League games.

Throw in his strong record on the international stage for the Netherlands – 50 goals in 102 games including the best goal of the 2014 World Cup, his flying header against Spain – and despite a lack of trophies to his name, van Persie must be considered one of the best strikers of his generation – and he’ll definitely be missed now he’s retired.

Andrea Barzagli won 8 consecutive Serie A titles with Juventus. Most top-level players tend to begin to slow down by the time they reach their mid-30’s, and so it’s rare to see someone pushing 40 still plying their trade at the top level.

That wasn’t the case for defender Andrea Barzagli, though.

The Italian international announced his retirement earlier in 2019 and hung up his boots last weekend at the ripe age of 38, but while he only made 7 appearances for Juventus in 2018/19, he managed 38 in 2017/18 – remarkable for a player of his age.

Barzagli had somewhat of a topsy-turvy career; in the early 2000s he made his name as a tough, no-nonsense defender with mid-level Serie A clubs like Palermo and Chievo before moving to Wolfsburg in Germany, and while he had success there – surprisingly winning the Bundesliga in 2008/09 – by the time he moved to Juventus in early 2011 he was already pushing 30.

But forming a rock-solid defence alongside fellow Italian stalwarts, Giorgio Chiellini and Leonardo Bonucci, Barzagli had an instant impact in his first full season with the Old Lady, as they won the 2011/12 Serie A title, in large part thanks to their impregnable back line.

Barzagli will go down as an all-time great Italian defender for longevity alone, and he feels like the type of player who Juve fans will probably miss most when they fully realise he’s gone.

Tim Cahill is arguably the best Australian player of all time. He might not be as decorated as the other players on this list; his best accomplishment, in club football at least, was probably his Division II title with Millwall back in 2000/01.

But ask any football fan from Australia and you’ll probably find that Cahill is as big a legend Down Under as any other player to appear for the Socceroos.

Largely playing as an attacking midfielder, Cahill debuted for Australia in 2004 and helped them to win that year’s OFC Nations Cup, before playing a pivotal role in the Aussies’ first World Cup qualification for over 30 years.

The 2006 tournament turned out to be a mild success for Australia as they reached the Round of 16, but it was a huge success for Cahill, as he became the first Australian to score a World Cup goal with a brace against Japan, enhancing his reputation heavily in the process.

Cahill would play in two more World Cups – 2010 and 2014 – and despite Australia failing to make it out of the group stage in either tournament, Cahill himself managed to score in both, with his goal against the Netherlands in the 2014 edition being one of the very best goals on offer that year. With 50 goals in 108 appearances for his country, Cahill remains Australia’s all-time top goalscorer.

Despite his club achievements being overshadowed by his international ones, Everton fans will always remember his famed celebration – shadow-boxing the corner flag – fondly too, as he spent 8 seasons at Goodison Park at the peak of his career.

A true cult hero, it might be a while before Australia produces another player of his caliber.