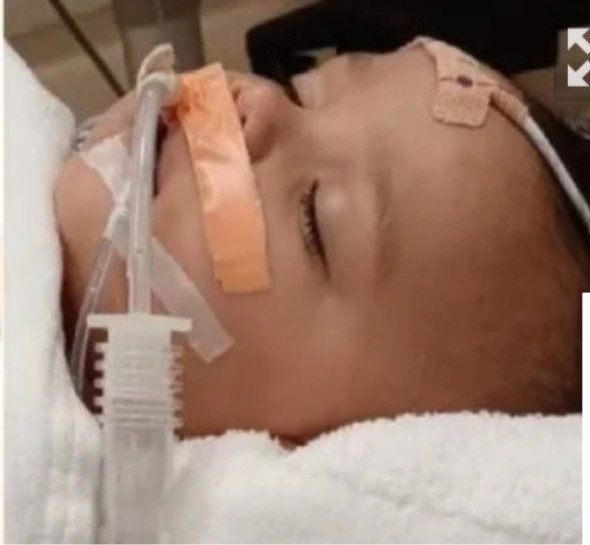 A mum, Laureen McArthur is now standing trial after she was arrested for allegedly using steam to burn her 14 month-old son, Dominique, in a bath and then using the son’s death to beg for money on Facebook.

According to reports, Laureen McArthur, 27 has severely injured her son Dominique at their residence in Union City, Tennessee. On November 10, Dominque was rushed to hospital with burns covering 47% of his body, and died on November 14 after being transferred to Arkansas Children’s Hospital for specialist treatment.

McArthur was arrested and charged with negligent homicide and child abuse on Tuesday December 1, after begging for money on her Facebook account, and sharing photos as well as a video of Dominique’s funeral.

The alleged killer posted a link to her Cashapp account the day after Dominique was admitted to hospital, and wrote: ‘If y’all wanna send me some money my Cashapp is $hannahp2000 any lil bit will help right now fr (‘I’M NOT PUTING NOTHING ON FB BOUT IT AS OF RIGHT NOW’)

McArthur also shared photos of herself at her son’s funeral before she was arrested . She announced Dominique’s death on November 14, 2020 writing: ‘We love you baby boy.’

Before being arrested, McArthur shared multiple images of her late son and paid numerous tributes to Dominque on Facebook, writing ‘RIH’ (rest in heaven).

McArthur also uploaded images from the funeral including snaps of pallbearers carrying Dominique’s small white coffin to his grave, and a 15 minute video of a pastor conducting the service.

According to details released by investigators McArthur remains in Olbion County Jail awaiting her next court hearing. She now faces charges of negligent homicide.