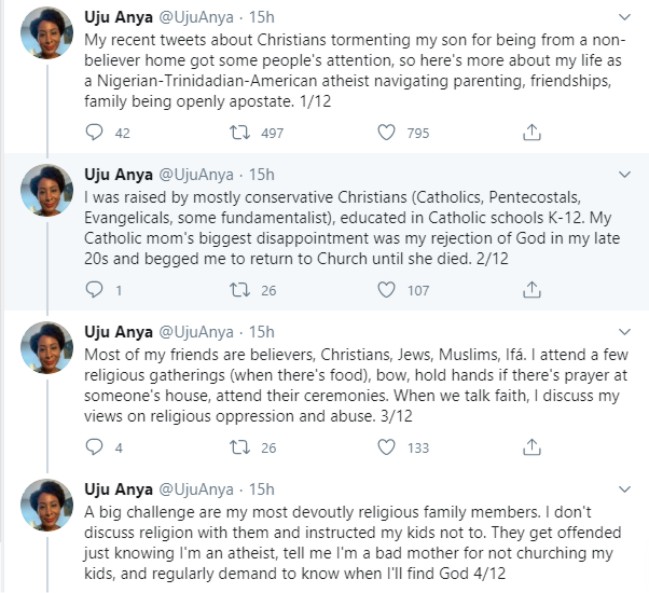 Being an atheist seems like a calamity to most Nigerians and a true reflection of that has been shared by a Nigerian university professor who is an atheist mum.

The scholar identified on Twitter as Uju Anya took to the micro blogging platform to share details of some of the challenges she and her children have been facing in the hands of Christians.

Uju who acknowledged that she was raised by mostly conservative Christians, stated that her kids are accosted by people who tell them how atheism will harm them and also lead them to hell.

She also disclosed that her open atheism is a crisis to her devout relatives who tell her that her criminal relative (thief, rapist, batterer) has better morals than her.

My recent tweets about Christians tormenting my son for being from a non-believer home got some people’s attention, so here’s more about my life as a Nigerian-Trinidadian-American atheist navigating parenting, friendships, family being openly apostate

I was raised by mostly conservative Christians (Catholics, Pentecostals, Evangelicals, some fundamentalist), educated in Catholic schools K-12. My Catholic mom’s biggest disappointment was my rejection of God in my late 20s and begged me to return to Church until she died

Most of my friends are believers, Christians, Jews, Muslims, Ifá. I attend a few religious gatherings (when there’s food), bow, hold hands if there’s prayer at someone’s house, attend their ceremonies. When we talk faith, I discuss my views on religious oppression and abuse.

A big challenge are my most devoutly religious family members. I don’t discuss religion with them and instructed my kids not to. They get offended just knowing I’m an atheist, tell me I’m a bad mother for not churching my kids, and regularly demand to know when I’ll find God

These relatives’ problem is I don’t lie/hide not believing in God and raising non-believers. They accuse me of disgracing them and our family by saying I don’t go to church when outsiders ask. Though I don’t contest their faith, my open existence as an atheist is a crisis

My open atheism is such a crisis to my most devout relatives, they said my felon relative (thief, rapist, batterer) is more moral than me, since at least he accepts Jesus. They say awful things to their kids about me and keep them from talking to me about, well, anything.

These devoutly religious relatives shield their kids from me, because they claim I’m immoral and a bad example. But the bigger problem is that I’m a (very successfully) living contradiction of what they teach their children, that no good can come to or from a heathen life.

Another challenge are my kid’s teachers/classmates. I tweeted how they abused my son in preK and 2nd grade. My daughter in K and 1st constantly talked about hell and how kids said we were going there. This always happens when my kids tell other kids we don’t go to church.

I don’t teach my kids to deprecate religious faith or insult believers, because I don’t do that. I also don’t teach them to lie. So, just saying we don’t believe is already an affront or insult for some, because they see our rejecting God as questioning their belief in God.

My kids and I also battle the false idea that you need to believe in God and follow religious teachings to be a good person, so those who can’t imagine morality outside religion assume we’re selfish, “don’t answer to anybody,” nor do we feel beholden to fellow humans.

Many who accost my kids and I about how atheism harms us, that we’re going to hell, claim they do it for love and fear for our salvation. They may even sincerely believe it. However, their insinuation of our immorality, threats, emotional manipulation don’t show any love.

The biggest challenge my kids and I face is not any despair or sadness or lack we experience in the world as non-believers. It’s the baggage others feel about us and impose upon us for being non-believers. Other people’s fear and insecurity they try and force us to carry.