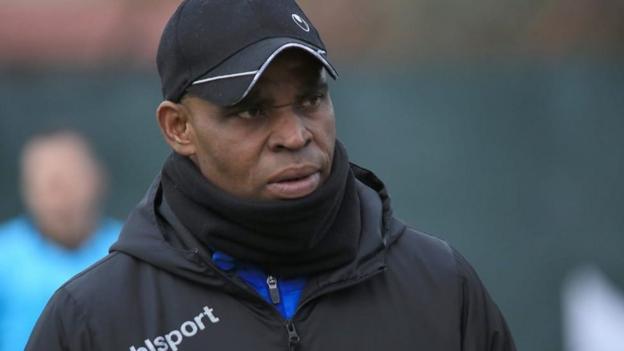 The ongoing League season in Albania has not been rosy for KF Tirana which made the management of the club to decide on firing the Nigerian coach.

Playing 11 games in all competitions, Tirana only managed to win three which the club’s chiefs considered as very poor performance to warrant the sack of the coach.

Egbo guided Tirana to win their first League title in a decade and became the first African coach to achieve the feat.

According to the report on GOAL, Egbo has appreciated the Albania side for the chance given to him to work with them and also wished the side good luck in future.

“I would like to thank the club for the opportunity to serve, which helped me become the first African to win a European title and end up managing in the Uefa Champions League and the Europa League.

“I don’t have any regrets or disappointment because I gave the maximum and the team did likewise, so I remain grateful to God for what we achieved and accomplished together,” he said.

Egbo was a goalkeeper during his active playing career and he also played 157 games for Tirana before he became a coach. The 47-year-old had 12 appearances for the Super Eagles and scored one goal as a goalkeeper.