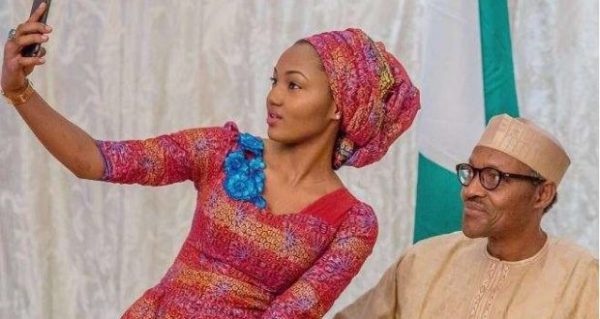 President Muhammadu Buhari’ daughter, Zahra Buhari-Indimi has asked Nigerians to desist from blaming her for the decisions or actions her father takes as president of the country.

While speaking at the First Edition of “An Afternoon with Zahra” tagged #ConversationWithZahra, an event organised in Abuja by her foundation, ZMB Homes, targeted at young persons, Zahra reminded Nigerians that she does not occupy the president’s office with her father, hence shouldn’t be dragged into the decisions that come the office.

While telling her story, Zahra said:

“2015 was when I knew what bullying was. It started with my photos going viral. I was actually having a yoga class and I was sweating but people were busy sending my pictures up and down.

“People used it for their gain during the campaign. But the issue changed the way people looked at my dad because they didn’t know that we were educated, we could speak English, and we could dress.

“So it changed a few things for good. It showed another light. People then understood that in the North not everybody is illiterate.

“Did you understand why some decisions are being taken? When I post my picture, it is my picture. It is not your child’s picture. I kept wondering why people do this to me constantly.”

She also asked victims of cyber bullying not to be intimidated by hateful persons, adding that many unfavourable comments were made out of envy.

Zahra added, “I know we have people who are victims here. So to be honest, if you are a victim you need to feel sorry for those people; they want to be where you are and they are not there. So they will try to pull you down. Would you let them pull you down? No. You need to know that you have the values that someone also wants.”

Also at the event which held in Abuja on Saturday November 30th was Zahra’s husband, Ahmed Indimi. See photos from the event below.