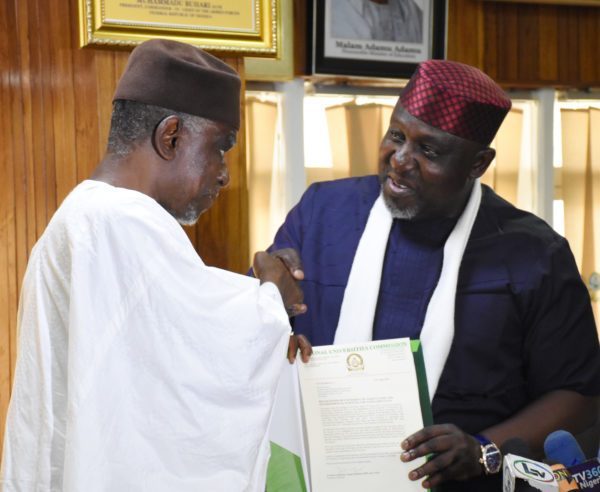 The National Universities Commission (NUC) has approved the take-off of the University of Agriculture and Environmental Sciences in Imo, as the 49th state owned University in the country.

The approval was given by Prof. Abubakar Rasheed, Executive Secretary of NUC in Abuja on Thursday.

Rasheed, while presenting the Certificate to Gov. Rochas Okorocha of Imo, said the university located in Umuagwo, now became the second University to be established by the state.

He said the establishment of the new university had increased the number of Nigeria Universities from 170 to 171.

He said the university which had already been enacted into law by the State House of Assembly had also met all the requirements for its recognition by the commission.

According to him, in line with our rules, we shall recognise this institution because it has fufilled all the requirements for establishing a university by a state.

“It is going to be a university fully owned by the Imo State goverment. The imo State House of Assembly has enacted a law in respect of the university; the governor of the state has also assented to the law.

“Out of all the six universities proposed for establisment by Imo goverment, the university of Agriculture and environmental sciences has all the strategic documents ready and had been presented to us.

”With effect from April 3rd, NUC recognise the existence of the university of Agriculture and Environmental Studies as the second State owned University and the 49th university established by state governments as well as 171st university in the Nigerian university system,” he said.

Responding, Okorocha said following the increasing numbers of university admission seekers from the state, there was need to build more universities to cushion the challenges of access to tertiary institution in Imo.

The governor said the state goverment had made provisions for adequate Infracstructure for the take-off of the university.

He, however, noted that the state was partnering with the private sector to help sustain the institution.

He added that infracstructural facilities had been put in place which would encourage private investors to invest in the state.

Okorocha said that the Eastern Palm University, University of Creative Technology, University of Medical Sciences, Marine university and a higher institution on Theology Studies were all underway in the state.

The Imo State governor, His Excellency Owelle Rochas Okorocha has received the operational license for the formal take-off of the newly established Imo State University of Agriculture and Veterinary Medicine.

While issuing the operating license to the governor, the Executive Secretary of the Nigerian Universities Commission, Prof Abubakar Adamu Rasheed applauded the governor for his giant strides in educational development.

The Imo State University of Agriculture and Veterinary Medicine is one of the many tertiary institutions established by the Rescue Mission administration and replaces the former Imo State Polytechnic, Umuagwo which has now been relocated to Ehime-Mbano.

The Rescue Mission administration has established about six new universities, two new Colleges of education and two new Polytechnics in the last eight years. The administration has also made enormous investments towards educational development in the State by building more than 700 new classroom blocks for primary school pupils, renovated several secondary school classrooms and as well employed over 10,000 teaching and non teaching staff in public schools across the State.