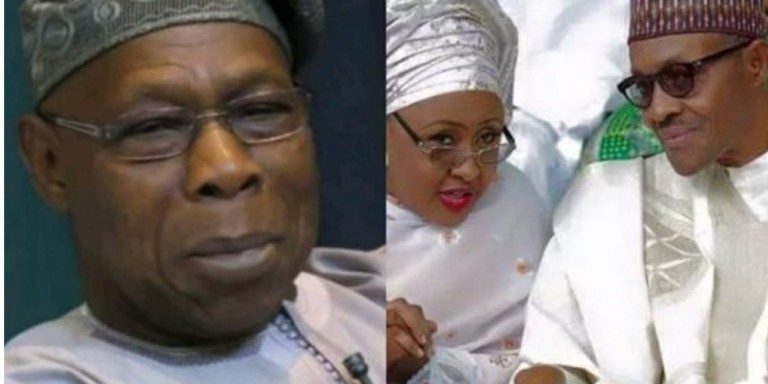 Former president, Chief Olusegun Obasanjo has urged President Buhari’s wife, Aisha, to rather engage the President in a “pillow-talk” in their bedroom concerning the problems of Nigeria.

Obasanjo was reacting to Aisha Buhari’s recent criticism of the programme of her husband’s administration.

The President’s wife had recently condemned the implementation of the Social Investment Programme, SIP, of the Federal Government as well as its approach to the banditry ravaging the northern part of the country.

However, Obasanjo has pointed out that by engaging the president in a ‘pillow-talk’, Aisha would get Buhari’s attention to drive home her displeasure about happenings in the country.

Obasanjo said this when he played host to the Editorial Board of a Social media platform, Pen-pushing Media at his Olusegun Obasanjo Presidential Library (OOPL) Oke-Mosan, Abeokuta, as was disclosed in a statement issued by his Media Aide, Kehinde Akinyemi.

The statement quoted Obasanjo as saying the position of Aisha Buhari was good for the development of the country.

According to Obasanjo: “It is nice that the President’s wife is talking, I think she did well, and maybe she should also have a pillow-talk with the President.

“I believe every Nigerian family, individual, group is entitled to livelihood. And it is the responsibility of all to make sure we have a dignified life. That should be our aim collectively.”

Obasanjo also called for more advocacy and sensitisation by the media to get the desired change in Nigeria.