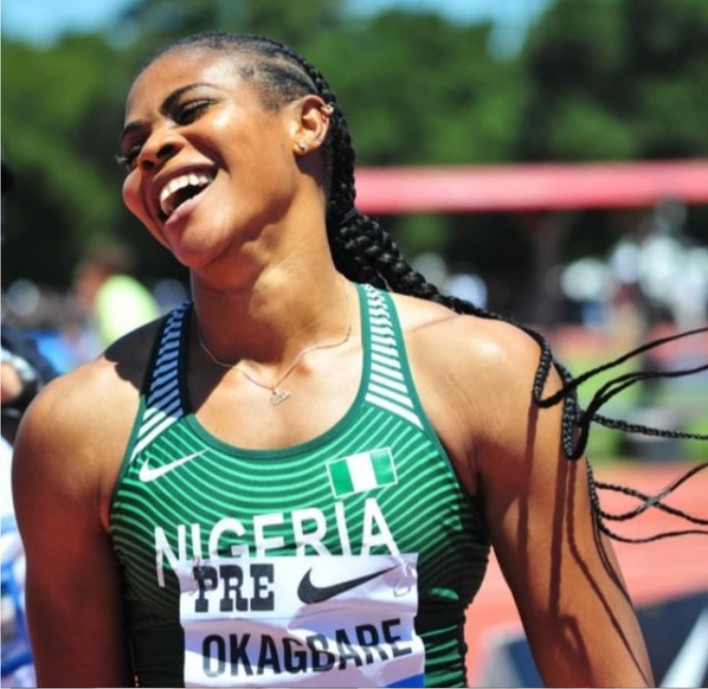 Blessing Okagbare topped the list of 12 Nigerian athletes cleared to participate fully at the Tokyo Olympics.

They were cleared by the Integrity unit of World Athletics, after it axed 10 other unidentified Nigerian athletes.

Adeniyi Beyioku, secretary-general of the Athletic Federation of Nigeria broke the news in a statement.

The athletic events will begin Friday.

Beyioku said that he was delighted with the latest development and assured that the federation will continue to be the goose that lays Team Nigeria’s golden eggs at the Olympics.

“The Integrity Unit of the World Athletics Council has cleared 12 Nigerian athletes as eligible to participate fully at the Tokyo Olympics.

“Reigning Nigeria sprint queen and 100/200m record holder, Blessing Okagbare tops the list of 12 athletes the Athletics Integrity Unit has cleared to compete in the athletics event of the ongoing Tokyo 2020 Olympics which begins on Friday.

“Okagbare who is making her fourth appearance at the games will be competing in the women’s 100m heat on Friday,” he said.

Also cleared to contest were sprint hurdler, Tobiloba Amusan, who is ranked number four in the 100m hurdles and long jumper Ese Brume, who tops the world list in her event coming to the games.

On the list is Grace Nwokocha, the home-based sensation who clocked 11.09 seconds in March at the MOC Grand Prix in Lagos to seal her qualification for the Tokyo Games.

Others are the trio of Divine Oduduru, Enoch Adegoke and Ushoritse Itshekiri who will be competing in the men’s 100m.

Oduduru will also race in the 200m, an event he holds the national record of 19.73 seconds which he set two years ago in Austin, Texas in the USA to win the NCAA gold.

“Shot putter Chukwuebuka Enekwechi who made it to the event’s final at the World Athletics Championship in Doha, Qatar in 2019 is also cleared to compete.

“The 4x400m mixed relay quartet of Imaobong Nse Uko, Patience Okon-George, Nataniel Samson and Ifeanyi Ojeli are also cleared to compete and will be in action on Friday in the first semifinal heat,” he said.

He added that the athletes were in good spirit and determined to return Nigeria to the podium for the first time since 2008 when Blessing Okagbare and the women’s 4x100m won Nigeria’s last medals in track and field.

Athletics accounts for 13 of the 25 medals won by the country at the games and two of the three gold medals.

The 10 athletes are part of the 23 Nigeria had earlier entered for the Tokyo Games.

“The rule states that athletes from ‘Category A’ federations must meet the minimum testing requirements to confirm their eligibility to participate in a major event.

“The key requirement in Rule 15 is that an athlete from a ‘Category A’ country must undergo at least three no-notice out-of-competition tests (urine and blood) conducted no less than 3 weeks apart in the 10 months leading up to a major event.

“Only then do they become eligible to represent their national team at the World Athletics Championships or the Olympic Games,” the statement noted.

Nigeria was included in Category A at the start of 2020, following a continued period of weak domestic testing levels.