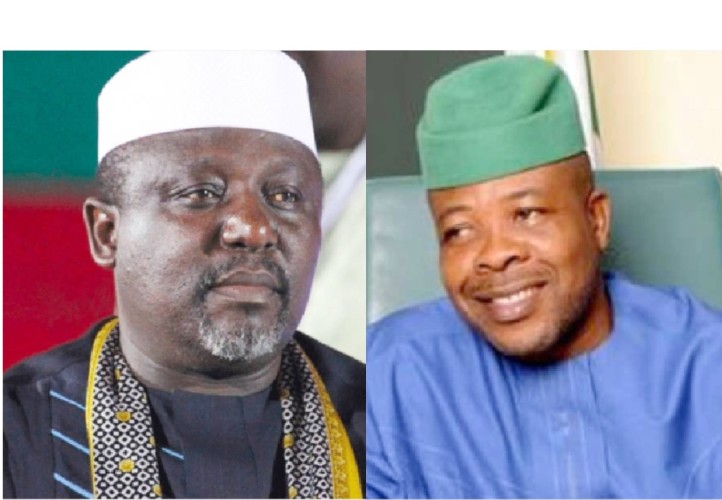 Former governor of Imo state, Rochas Okorocha has made an appeal to Governor Emeka Ihedioha to call the Secretary to The State Government, Uche Onyeaguocha to order.

Okorocha made the appeal in a statement released on Friday by his Special Adviser on Media, Sam Onwuemeodo.

In the statement, Governor Emeka Ihedioha has been told to take charge as the governor of the State and halt the incessant harassment and abuse of the wife and children of the former governor of the State, Rochas Okorocha by his senior appointees and their foot soldiers.

Specifically, Governor Ihedioha should call Uche Onyeaguocha and his thugs to order and stop them from their harassment and abuse of the wife and children of the former governor.

Chief Ihedioha was told not create an ugly history or set a very bad precedence as the first governor of the State who took delight in harassing the children and wife of the man he succeeded as governor.

Thugs alleged to be working for the secretary to the State Government, Chief Onyeaguocha invaded a mechanic workshop around the Orji flyover and took away a vehicle undergoing repair and owned by the daughter of the former governor, Uloma Nwosu, nee Okorocha.

“If Ihedioha’s government wanted anything from any of the former governor’s children or wife they could do so through the Police or DSS in the State. Invading their houses or impounding their private vehicles even from the mechanics for any reason, is barbaric and should be frowned at.

Okorocha went further to say that his “wife and children never committed any crime by remaining in the State after he had left as governor, when the children and wives of those before are all at overseas. They are here because they believe in the State.”