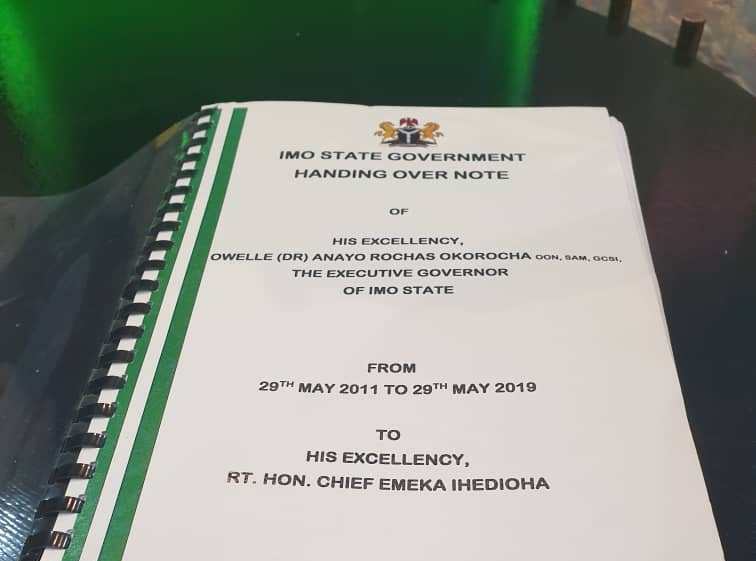 Imo State governor, His Excellency Emeka Ihedioha has continued to clear every doubts about his unpreparedness for governance. If his agents are not blaming Akachi towers for spiritually distracting him from doing anything meaningful, some marabouts would tell you that it is dangerous for him to sit on the podium designated for a governor in the Rescue Mission built Sam Mbakwe Exco Chambers.

The Imo governor’s latest fixation is on handover notes. He seems to believe that he could extend the already snapping patience of Imolites by continuing with the excuse that he wasn’t handed over documents.

Already, by effluxion of time, the Imo State governor has inherited the powers to take charge of all assets and liabilities of the State government as soon as it clocked 1am on Wednesday 29th May. Owelle Rochas Okorocha however prepared a well documented handover note of over 422 pages, where all assets and liabilities of the State were clearly listed, including 42.2 billion Naira liquid cash and another 5.7 billion Naira, with the bank details and statements fully attached.

The truth is that the governor, has, from when he was still a governor-elect, evaded every invitation extended to him by his predecessor to come forward for proper handover of documents.

The former Secretary to the Imo State Government, Sir Mark Uchendu also went severally to present the handover documents to him or any official he may designate, but he was snobbed.

The new Imo governor should get to work and stop wasting the times of Imo people with comical excuses. There is enough money for him to work with, and Imo people will not be patient with him for longer.

Attached are pictures of the hard copy of the handover documents prepared by the immediate past governor of the State.