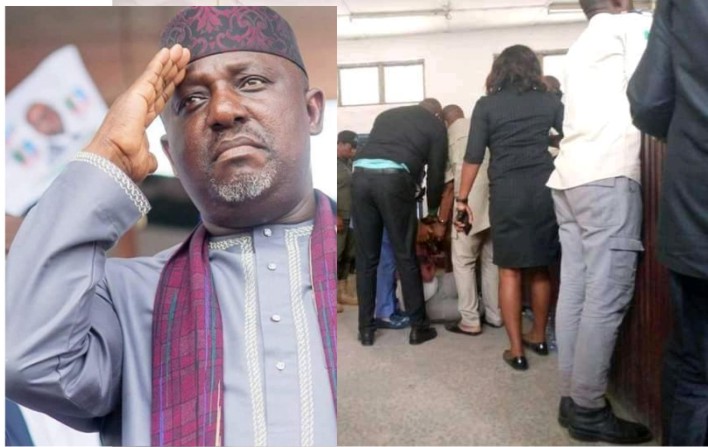 Darlington Flowrymz Ibekwe, a popular loyalist of Senator Rochas Okorocha and Uche Nwosu, fainted and caused a mild drama on Monday morning at an Owerri Magistrate Court, when he and others were arraigned for forcefully breaking into the sealed estate of the former governor’s wife.

Ibekwe and 13 other loyalists of Senator Okorocha, were accused of conspiring among themselves to disobey a lawful order issued by the state by removing the seal of the state government and entering into the sealed premises of Royal Spring Palm Hotel and Apartments belonging to Okorocha.

While Ibekwe was also accused of publishing a recorded defamatory matter on social media with intent to injure the reputation of the state government and the person of Governor Hope Uzodimma by exposing to hatred, contempt, ridicule and damage his reputation, Olu Chizoba was charged with unlawful possession of double barrel pump action gun without license.

After a six-count charge was read to the suspects, council to the defendants, Eddy Onyema, sought for their bail, assuring that they would return to the court to take their trial.

Onyema noted that none of the charges against the defendants was a capital offence, said, “worst, some of them are felony. That’s why we’re seeking for their bail”.

When the magistrate, B. U. Adikaibe, returned to the courtroom for her ruling, a suspect, Ibekwe, slumped.

He was however, revived by his fellow suspects, who pleaded for water with which he was revived.

After the incident, the court had without delay given its ruling by granting all 14 accused persons bail with N5 million each totaling N70 million, a traditional ruler to sign surety for each. The conditions, the court said must be fulfilled before they would regain their freedom.

Watch video from their arraignment below.