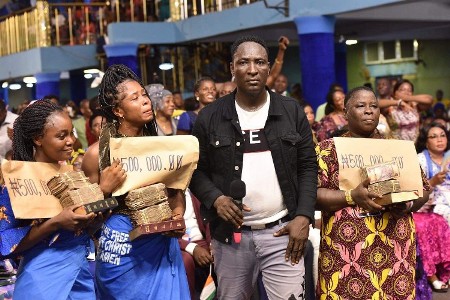 Three members of Christ Mercyland Deliverance Ministry (C.M.D.M), Warri, Delta state were left speechless after their church’s senior Prophet Jeremiah Omoto Fufeyin, called them out to receive N500,000 each after they had donated N50 naira as all they had to support the ministry’s building project.

The drama finally turned into jubilation as the founder, Mercy Television, Prophet Jeremiah Omoto Fufeyin surprised everyone by giving the 3 members who donated N50 naira with N1,500,000 million naira (N500,000 naira each).

The members who did not anticipate the blessings they left with said they had given all they had to support the ministry. Owomowomo 1 as the pastor is fondly called said he was instructed by God to bless them financially for publicly admitting they gave N50 naira to support Gods work after he had announced a minimum of N500 naira donation for the building project.

The thoughtful gesture brought tears to the eyes of the members, they could not believe what had just happened. They left the church happier and richer than they came.