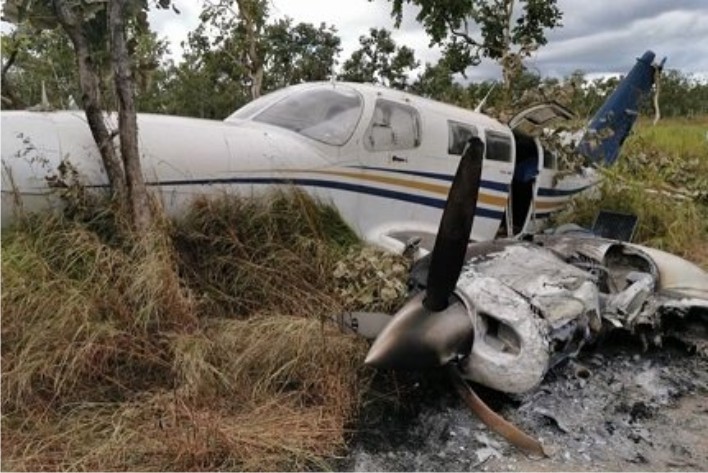 A light aircraft overloaded with cocaine crashed on take-off on its way to Australia, police said on Saturday, exposing a Melbourne-based crime syndicate and leading to the arrest of five men with alleged links to the Italian mafia.

The Cesna aircraft, which was stuffed with more than 500 kilograms (1,100 pounds) of cocaine, went down while attempting to leave a remote airstrip in Papua New Guinea on July 26.

Australian Federal Police said in a statement that “greed played a significant part in the syndicate’s activities” and added they “cannot rule out that the weight of the cocaine had an impact on the planes (sic) ability to take off.”

Five suspects were arrested in Queensland and Victoria in recent days, and have been charged with conspiring to import over 500 kilograms of cocaine and a number of related offenses. They each face a maximum sentence of life in prison if convicted. The pilot was also arrested two days later, after surrendering himself to police.

Authorities said the plane had flown to Papua New Guinea from the small town of Mareeba in Far North Queensland, flying at about 3,000 feet to avoid detection by radar.

The cocaine stash was eventually found on Friday after a search of the area. Its total value was estimated to be around 80 million Australian dollars ($57M USD), the equivalent of about 500,000 street deals.
“With current interstate travel restrictions in place due to COVID-19, the attempt to import illicit drugs into Australia shows how opportunistic and greedy organised crime can be,” AFP deputy commissioner Ian McCartney said in a statement.

The arrested men — aged 31, 36, 31, 33, and 61 — were charged with a variety of crimes. The first man arrested faces charges of directing activities of a criminal syndicate and money laundering of over $1m AUD. A number of assets were seized by police, with an estimated total value of $3.5 million AUD.

The drugs bust is one of the largest in recent Australian history. In 2016, a similar-sized 500 kilogram haul of cocaine was seized by officers in New South Wales.