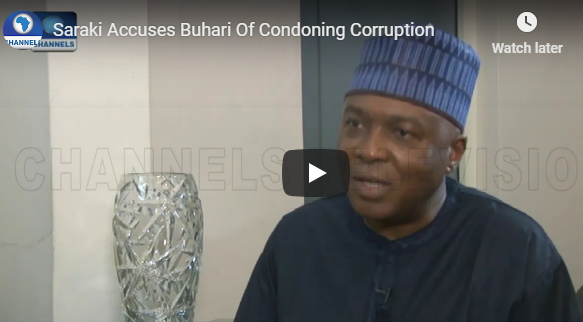 Senate President Bukola Saraki has accused the President Muhammadu Buhari’s government of being corrupt and has no moral ground to fight corruption because of corrupt practices within the administration.

The Senate President said this in an exclusive interview with Channels Television’s Seun Okinbaloye. He pointed out that the Buhari-led government came in on a promise to oust corruption but have rather allowed a new set of corrupt officials to thrive.

Saraki said there is no way the present government can be speaking of integrity when it has “a member who has been found wanting, left without charge or prosecution”.

He said, in 2015 the Jonathan administration was ousted on three major promises which are: security, economic growth and the fight against corruption.

The lawmaker, however, opined that “Nigerians are not better off today than they were in 2015”. He said that Boko Haram insurgency has worsened, in that “more territories are being lost”.

Speaking about the economic situation in the country, the Senate President said: “creation of more jobs has failed”. He also added that Nigeria has dropped to a very disturbing position on the poverty chart.

Regarding the pace of the PDP campaign, Saraki said the steam has not fizzled out for the opposition party. He, however, noted that the environment has become very different and hostile under the All Progressives Congress.

He said, “the people are more on the edge because of the intolerance of the government”, citing the arrest of Deji Adeyanju.

The Senate President further noted that there is no issue within the PDP, arguing that the opposition presidential candidate has the full backing of all members and stands a great chance against President Muhammadu Buhari.

“Massive Fraud In The Oil Sector”

Saraki has alleged that there is massive fraud within the oil sector.

In an interview with Channels Television’s Seun Okinbaloye, the lawmaker said applying subsidy on assumption that Nigeria consumes fifty million litres (50million litres) of fuel a day, is fraudulent.

Saraki said in the Jonathan administration subsidy was based on an assumption that the nation consumes 30million litres of fuel daily.

He added that he and some other lawmakers warned that the Jonathan government was condoning corruption “by over importing fuel and because of that we were losing a lot of money”.

The Senate President said the present government instead of changing the process, jerked up the importation by 20 million litres extra.

He said, “you would have thought that a government that was to fight corruption and prevent leakages would even if you are going to continue subsidy, ensure that it is better managed.”

Saraki said there is no way Nigerians can consume 50million litres a day, “it is just money being stolen,” he alleged.

He further argued that there is almost no way that President Muhammadu Buhari is not aware of what is going on within his government, stressing that the Senate has investigated the issue but “we have an environment where agencies of government are emboldened to disregard the National Assembly, it is a big issue”.