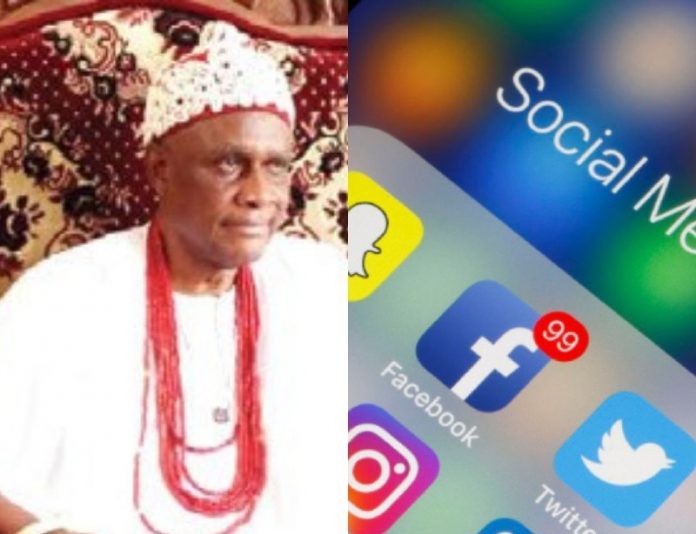 Social media has been a huge blessing to the 21st century human race. But, like most other good things in life, its abuse can lead to detrimental effects as the traditional ruler of Ekwulobia has revealed how the social media has contributed to the continued crisis in his community.

Igwe Emmanuel Onyeneke, the traditional ruler of Ekwulobia community in the Aguata Local Government Area of Anambra State on Tuesday, blamed the lingering crisis in his kingdom on the social media.

Lamenting that the opposition in the community had used the social media to propagate hate and bigotry, thereby prolonging the communal feud, Igwe Onyeneke said that the crisis would have ended long ago if not for the sustained propaganda on the social media.

The Igwe stated these at a press conference in his palace in preparation for the funeral of the traditional prime minister of Ekwulobia, Dr Gabriel Ezeukwu.

The monarch regretted that the prime minister died without peace returning to the community, which he championed.

He alleged that a certain person, who was reaping from the crisis, had siphoned over N100m from the commonwealth of the community.

The monarch stated, “Opposition within the town union is as old as the formation of the first organised improvement union over 80 years ago.

“Going down the memory lane, the late Chief Gabriel Nnaike of Umuchiana, the leader of the first improvement union, was disgraced by the people of Ekwulobia, whom he served with dedication and honesty.

“As a result, he was very sad and since then, the trend has been repeating itself. This attitude of casting aspersions on anyone at the leadership of the town by the Ekwulobia people continues to recycle itself and has even modernised its operation with the emergence of the Internet.

“Apart from our attitude and ingratitude to our leaders, another factor, which I identified when I had my coronation, was the absence of a town constitution as required by the laws of the state.

“Ekwulobia only operated development union, improvement union and peoples’ assembly constitutions, which were not powered by any town statute.

“Women, children and persons under 18 years were legally excluded in those constitutions. Membership was optional.

“The only constitution Ekwulobia has ever had as a town is the Constitution of Ekwulobia Town, 2010, which was drafted by a 59-member constituent assembly representing all the federating villages, Diaspora branches, women, youths and other stakeholders.”

He said the Anambra State Government had at several times intervened in the matter and had endorsed the leadership of the town under his watch.

“But a leader of the opposition in the community has refused to embrace peace, because he is making too much money from the commonwealth and fighting us with it,” Onyeneke added.