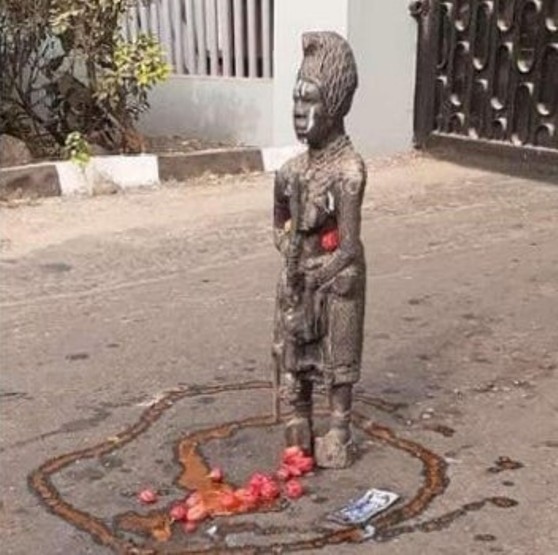 The students and staff of University of Ibadan (UI) were left in fright at the sight of a strange sculpture placed in front of the main entrance gate by unknown persons on Friday morning.

The image carved in human form had never been seen in front of the gate until the morning of February 14.

The image might not have been suspicious, except that it had pepper and tomatoes placed around it. Tomato juice was also seen circling the image, thereby making it look fetish-like.

A senior staff member of UI who spoke with Tribune Online stated that it wasn’t strange for members of the Non-Academic Staff Union (NASU) of the institution to place fetish objects in strategic areas of the school when they embark on strike to scare people away.

The NASU leadership on Thursday, called on its members in UI to begin an indefinite strike action against the school authorities to press home its demands for better welfare package.

NASU chairman, UI, Comrade Malachy Etim, while speaking to the publication, confirmed the development. He said it was the union that placed what he called “a harmless object in front of UI gate, which according to him, “only symbolises the unity of our union.”