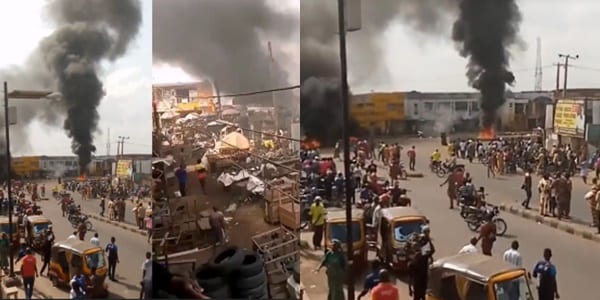 Officials of the Nigerian Correctional Service (NCS) and commercial motorcyclists operating in Agodi-Gate area of Ibadan clashed today, leading to the reported death of two persons.

Trouble was said to have started when the officials of the correctional service insisted that the commercial motorcyclists who plies Iwo-Road-Bashorun-Akobo axis would not be allowed to park wrongly at the frontage of the prison yard.

It was gathered that what started as a mere warning later erupted in a fracas when the motocylists defied the instruction.

Sources said the warders had to use teargas canisters’ to scare the motorcyclists.

Unconfirmed sources said two persons were feared dead during the crisis, but the Correctional authority has not confirmed the casualties as at the time of filing this report.

While the crisis lasted, many shop owners, traders and business operators in the vicinity quickly locked their shops for the fear of been attacked while commuters and other road users ran helter-skelter.

A source said, “We have to hurriedly close our shops, some of us ran away while some closed their shop while they were still inside the shops.”

Anjorin in a telephone conversation with Journalists said that men of Operation Burst, a joint security outfit set up by Oyo State government has been stationed at the scene of the incident.

He said, “There was a little misunderstanding between the officers and some Okada riders. They normally pack at entrance to the prison. We usually told them to move downward.

“We did it the same way today and there was a little misunderstanding. But, I can tell you that normalcy has returned. Nobody shot and Operation Burst has been stationed there”.

Also speaking on the clash, the Police Public Relations Officers (PPRO), Oyo state Command, Olugbenga Fadeyi in a statement denied some media report alleging the police to be behind the crisis.

He said “Contrary to the currently trending news online, that police men fired shots leading to injury at Agodi gate area this morning.

“The truth is that there was a clash between officers of the Correctional Service and bike men stationed at Agodi Gate.

“Upon receipt of this information, police men as well as other security agencies moved to the scene to ensure there’s no breakdown of law and order that could lead to coordinated attack on the prison facility.

“Police men fired no shot. Further development will unfold and be communicated latter.”