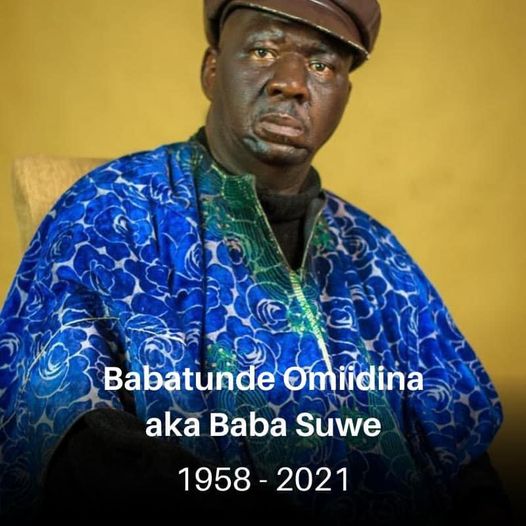 Adesola Omidina, daughter of the late actor confirmed the sad news in a post on her social media page on Monday.

“This is to announce the sudden death of my father Mr Babatunde Omiidina. The legend and rare gem “ Babasuwe “ 11/22/21
Other details will follow shortly!
May your soul rest in perfect peace Dad.

A month ago, the news that Baba Suwe was sick was widely reported.

His colleague, actor Yomi Fabiyi who tried to reach out for assistance said that Baba Suwe’s health became worse after the problem the comedian had with officials of the National Drug Law Enforcement Agency (NDLEA).

Baba Suwe was arrested by NDLEA at the Murtala Muhammed International Airport on allegation of drug trafficking, but was later released after screening and was exonerated.

He later approached the courts for the restoration of his fundamental human rights and was granted general damages of N25 million against NDLEA.

Fabiyi claimed that the money was not paid despite Baba Suwe falling sick which Fabiyi said was due to the torture from the NDLEA encounter.

Then Fabiyi appealed to stakeholders in the entertainment industry to rally round to rescue Baba Suwe from the undisclosed ailment.

“On Baba Suwe, I am calling on all senior colleagues in the entertainment world especially those close to Baba Suwe because I don’t have everyone’s contact to please reachout to him ASAP (As Soon As Possible), he wrote.

“The torture done on him by NDLEA is vastly damaging his health at an alarming rate.

“He told me he no longer feel comfortable since that episode. Baba Suwe is a widower, he can hardly walk properly as I speak, let alone go to film.

“How will he feed and take care of the children Aunty Moladun left behind?

“This is an A-List Entertainer and this conspiracy of silence gives me MENTAL AGONY on my part, I don’t want to speak when it may be too late, I won’t forgive myself.’’

Fabiyi said Baba Suwe told him that NDLEA officials inserted a long pipe through his anus and was detained for too long.