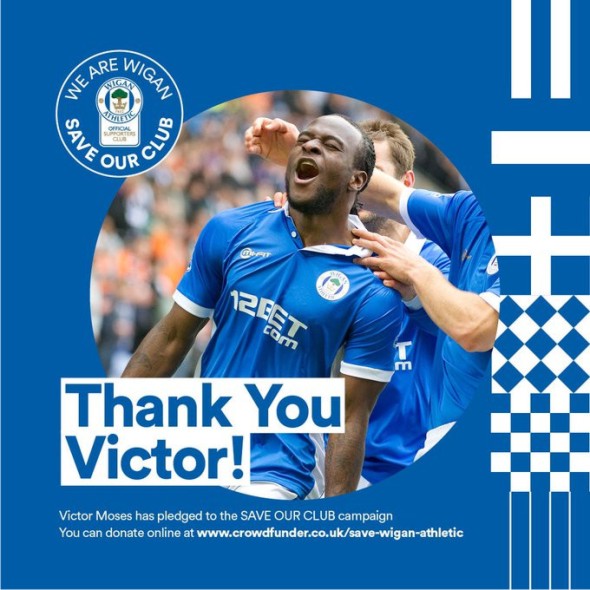 Chelsea star footballer, Victor Moses, has made a significant donation to support his former club, Wigan Athletic amid their financial struggles cause by the coronavirus pandemic.

Wigan were deducted 12 points after going into administration towards the end of the 2019-20 season, which forced them into relegation alongside Hull City and Charlton Athletic.

Moses played for the Latics before joining Chelsea in 2012.

The club’s supporters body has confimed that the former Super Eagles player has made a significant financial contribution to the club that’ll stop them from going into extinction.

The supporters are aiming to raise £750,000 to support the club this season, and they are now within £100,000 of the target after Moses sent money.

“Wow – what can we say? When Victor got in touch to say he wanted to help by donating such a substantial amount, I just couldn’t believe what I was hearing – it’s such an incredible gesture,” , the chairperson of Wigan Athletic Supporters’ Club, Caroline Molyneux, said.

“Victor wanted to make the donation and remain anonymous but we simply had to make sure he gets the recognition he deserves.

“We are so thankful to Victor for his support. He is an excellent footballer, a true role model and someone we always enjoyed watching at the DW Stadium – he will always be welcome back here, even more so now!”

Moses, took to his Twitter handle to call for more support to save the future of the 2013 FA Cup winners.

“Wigan Athletic will always have a special place in my heart,” Moses tweeted.

“I have so many incredible memories from my time there and the people of Wigan and everyone associated with the club have always been so good to me and my family. We must do all we can to protect the future of this great club.”

1 thought on “Victor Moses contributes over £400,000 to help ex club, Wigan, out of financial crisis”