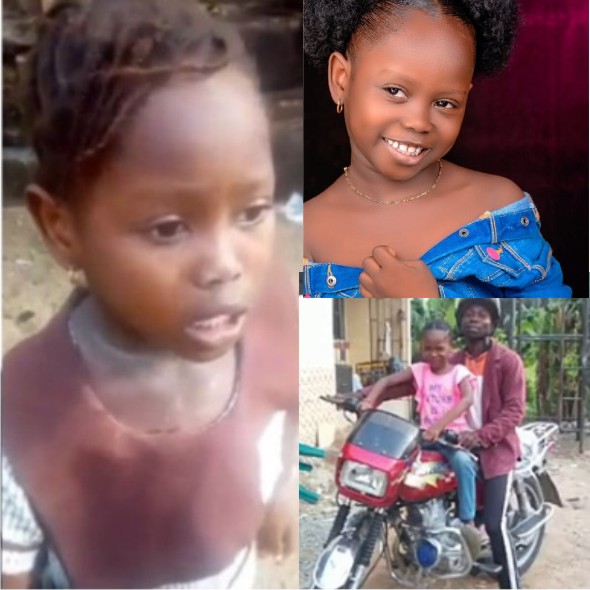 Success Adegor, the school girl whose video went viral when she was chased out of school, has revealed that all the promises made to her after her video went viral, were not fulfilled.

Success Adegor became an internet sensation her video quickly went viral with several people, including public figures, coming out and promising to change her life for the better.

In a new video which she featured in, Success debunked reports that her family became rich after the incident. According to her , all the promises were fake promises as none was fulfilled.

Watch the video below and see people’s reactions that followed.

Peace Ozi Chukwu: Imagine if a little girl knows this much about her country, what other change are we still expecting. A country where kids can analyse how poor her government is. Oh what a failed generation of politician

Oni Misi: I’m not trying to bash on her….she’s right…
But if only she had a content,brands won’t abandon her and her family…she was supposed to find a talent like comedy or acting,or modelling for her to stay consistent….just because she was shouting ‘dem go flog tire’ doesn’t make her a star yet….

Victor Jr King: So all the promises ar all fake
Hmmmm even the scholarship and Ambassador Deal chaiiii this is not good ooh
Even those celebrities that use her to shine didn’t even fulfill their promise

Jhoe Yung Joseph: Her parents cause the whole problem…
They were initially taking the whole thing like a Right..
That’s is why many withdraw their promises

Gift Yeezu: They kinda look ungrateful.
I’m sure your dad acquired that new motorcycle From the alerts you recieved from Ay and Cos.
Be contented at least for the little.

Yetunde Tina: Oh God this girl still flashed through my mind some days back oooo that we didnt hear anything again since her viral video

Ayeni Olamide Lamzars: Pls make another video and shame them abeg! Fake promises up and down….
That’s why it’s good to surprise people than making promises..I learnt my lessons too

King Oghene Okome: Naija na scam
Thats how one man came to my house saying people are contributing to build a swimming pool in our area that I should drop whatever I can to assist them…I went inside and brought out a glass of water as donation
I do bad???

Gibson C Ossai: My dear naso life be o
E no balance at all…tell ur papa to hustle and forget promises ..na only am and ur mama born u…remember

Chi Amaka: Audio country
Audio leaders
Don’t put your trust on anybody……they only care for their families…..anyother person or people doesn’t matter to them……

YeseNia Joyous Kevin: Just the way they have started promising the young boy “mummy calm down and rest a little” ambassador of wetin I no know  what a country

Annabel Chinenye: And the lady that did the recording received money and car gift from one pastor and others

Nigeria with their Audio promises
My dear ur God is still alive and he will see u through.. do not put ur trust in man look up to God, God can do all he says put all ur trust in him God is not a man his not a liar.. that’s the two difference man disappoint but God doesn’t

Franco Di Santo: That’s how one man promised to train me in University and pay my remaining Secondary school fees, that he has given me a scholarship because of what I did on our Graduation day I was so happy buh after everything the man disappeared…..after everyone clapped for him for being nice, Naija na scam abeg

Joel Eke: But I saw pictures of her being handled cash live on net where she was told to go and pay her school fees ayam nur hundastanding o..

Kate James Udofia: Little girl, just finish school, grow and take care of your parents
Forget the promises and focus on your future
Don’t expect anything from Nigerians

Jane Jacobson: Chai! Even AY? Nawa oo, God will help us all have our own money and not expect anything from anybody

Favour Mbachu: This is a lie. Success that’s into movie now with enyinna nwigwe… She is living fine now. This video is a big lie… I don’t believe it.