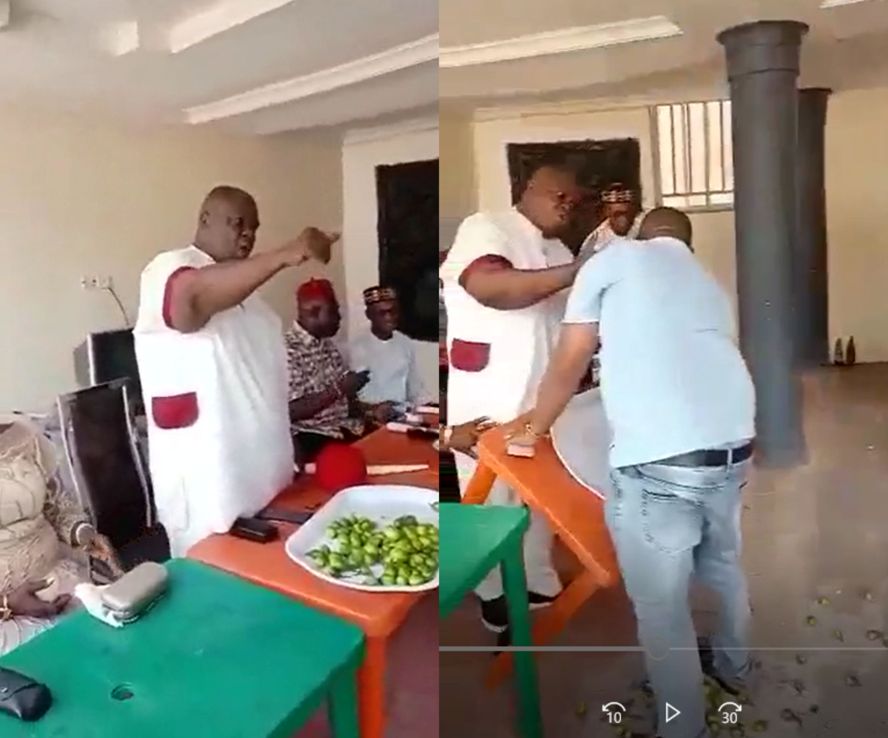 A video now in circulation shows the moment a former speaker of the Imo state House of Assembly, Rt Hon. Chiji Collins representing Isiala Mbano State Constituency angrily threw away a tray of garden eggs and kola nuts served at a meeting with his constituents.

Trouble started when one of the constituents at the occasion with the Speaker, summoned the courage and started pointing out the failures of the lawmaker and asked the former speaker to give reasons why he was asking for another support when the support already given to him for the past years yielded no political dividends.

That statement caused a commotion in the gathering as Hon Collins flared up and demanded the young man to sit down.

However, the young man refused and continued to ask questions. It got to a point the former speaker had to fling the table on which the tray of kola was placed.

It was was gathered that the lawmaker’s action brought to an end the gathering as the chaos frightened people in the vicinity. See the video below.

Collins was elected in 2019 under the All Progressive Grand Alliance (APGA). He became Speaker of the State Assembly after he defected to the Peoples Democratic Party, PDP, under the administration of former governor Emeka Ihedioha.

In 2020, he defected to the All Progressives Congress (APC) when Hope Uzodimma, was pronounced winner of the 2019 gubernatorial election by the Supreme Court. He continued as the Speaker before he was impeached fews months later.

Meanwhile, when one of the loyalists of Collins named Acha spoke to Vanguard, he said the video was edited to blackmail the former speaker and that the young man in the video was unleashing abusive words on the lawmaker and not talking about anything performance.

He said: “The young man in that video was trying to blame Chiji for not speaking out during the time of insecurity in the state. The young man is a member of the Peoples Democratic Party (PDP) who was smuggled inside the town hall meeting to cause confusion. They want chiji to get involved in the battle of insecurity in Imo. All they want is to confuse and destroy the image of Chiji so that their own man can become the next Isiala Mbano lawmaker.”