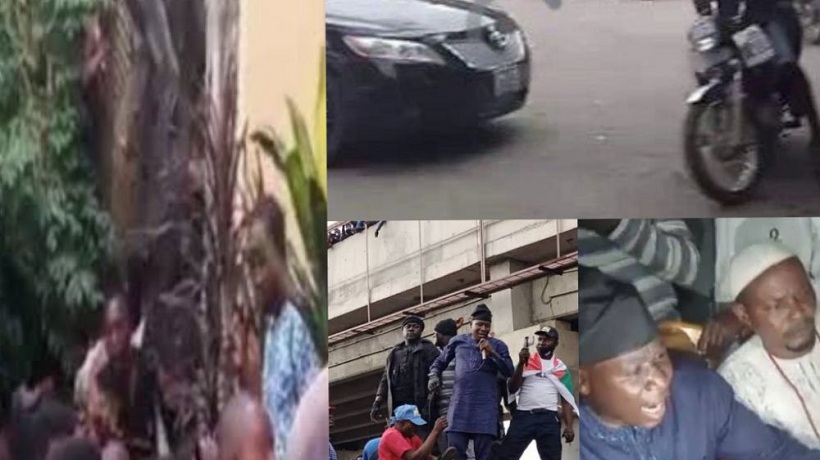 Popular Yoruba activist and secessionist, Sunday Igboho caused drama at the Palace of Oba Rufus Adeyemo Aladesanmi III, the Ewi of Ado Ekiti, the capital of Ekiti state when the traditional ruler refused to welcome him.

According to reports, Sunday Igboho stormed Ado Ekiti with hundred of agitators, insisting that there is no going back in the actualization of Yorba Nation.

The Yoruba Nation agitators who converged at Old garage area, Ado Ekiti, for the rally as early as 8am later moved to the popular Fajuyi Park area of the town where the crowd received Sunday Igboho.

They were all armed with placards and blocked the major roads hindering the vehicular movement for several hours.

According to an eyewitness, there was a presence of security operastives including the men of Nigeria Police, the Department of State Services (DSS) and the Amotekun corps at the venue.

Security personnel told the press that they were there “to prevent the breakdown of the law and order and ensure miscreants do not hijack the rally”.

However, when Sunday Igboho and his men got to the Palace of Ewi of Ado Ekiti, the monarch refused to let them in. So, he jumped over the fence to get in.

Later, Igboho addressing the enthusiastic crowd, lamented the suffering of Yoruba people in the hands of criminal Fulani herdsmen, saying all hands must be on deck to achieve the desired aim of secession.

He declared that the 2023 general elections would not hold in the region unless the Oduduwa republic is created, calling on all stakeholders to support him and other leaders in achieving it.

He said: “I am sorry for coming late and I want to really apologise for this. I went to a meeting with some Yoruba leaders that was the reason I came late.

“Today, we are here to sensitise our people that we can no longer ensure the sufferings being meted out to us by Fulani feudal lord’s. We are no longer slaves under them.

“The South has oil and water and other natural resources, but Fulani are the ones enjoying them. Most of our university graduates are Okada riders being what our politicians who tell lies recklessly have made us to be.

“Enough is enough for the Fulani colonisation in our land. We have all the natural resources but it is the Fulani people that are controlling it. It is enough. We have a lot of our youths that are graduate but no job for them, that should not be the case.

“This is the reason we said it is enough, we are not going to work with them. We will not vote in 2023, if there is no referendum, that is the truth. The election won’t hold.

“You can see what the criminal Fulani are doing in our land, killing us, kidnapping and raping our women. People can no longer go to farms for fear of being killed. As from today, we will begin to enter the bushes to chase out Fulani from our land. We don’t want them again.”

“Yoruba is the most educated race in Nigeria, but are these graduates getting jobs, no. Rather, our politicians would be buying motorbikes for them for Okada riding. This was wrong and would have to stop. Can they allow their children to ride Okada?

“Today, they have shared everything that belongs to Nigeria among them. The President is a Fulani man, the Inspector General of Police, Director General of the Department of State Services, the Chief of Army Staff, Chairmen of the National Drug Law Enforcement Agencies and Economic and Financial Crimes Commission and Comptrollers General of Immigration and Customs are all Fulanis.

“They said they gave us the Vice President, who was a mere spare tyre.

“Let me say this emphatically, we won’t vote in the Southwest in 2023. We need a government of our own. The Fulanis are kidnapping us and collecting ransoms, killing and raping us and our leaders were watching because of politics. This will no longer be tolerated.

“The next line of action now is that, we are entering the bush to chase away these Fulani herders. We don’t want them on our lands again. We will pursue them just like I have been saying”, he stated.

Also speaking, the media communication secretary of Ilana Omo Oodua group, Maxwell Adeleye said the rally was aimed at sensitising the people of Ekiti on the need for the creation of Oduduwa nation.

According to him, “We at Ilana Omo Oodua, supported by well-meaning Yoruba people within and beyond the shores of Nigeria will continue to mobilise and educate our people on the dangers associated with our continuous stay in Nigeria.

“We are ready and our people are ready. The rally today is to sensitise the good people of Ekiti state to start preaching the gospel in all the nooks and crannies of Ekiti state. We shall succeed and triumph against the gighota. We shall rescue our land from the jaw of under-development.

“Our continuous stay in Nigeria is slowing down our progress. We were progressing and excelling well in all ramifications before the coup of 1966 which has dragged us 60 years backward. The only panacea is for the Yoruba people to have their independence from Nigeria and that shall be achieved peacefully and logically without violence.”