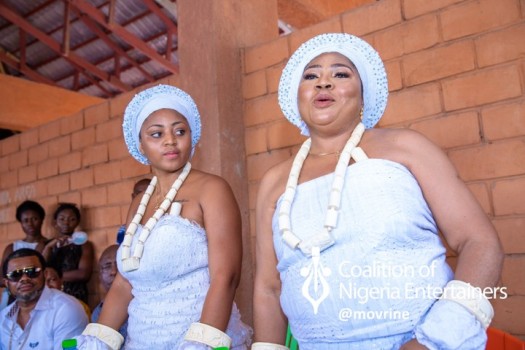 Rita celebrated the unabated marriage induction ritual of her daughter to Billionaire Politician, Senator Ned Nwoko, as she stood beside her through the traditional Induction ceremony.

Regina’s Mum expressed excitement as she danced joyfully, showing her endless support for her daughter as she undergoes transition into the Otu-Udu group as a confirmed wife according to customary rites of the Anioma Community.

Few Months ago, the Actress bought her mum a luxury 100million naira apartment, which was believed to have been acquired for Regina by her Billionaire husband, but she gave the house to her mum.

However, many family friends and local groups in Anioma and surrounding communities were present to celebrate with the Actress at her marriage induction into the Anioma Community by women of Otu-Udu community.

Watch the video below and see Rita dancing excitedly at the ceremony.