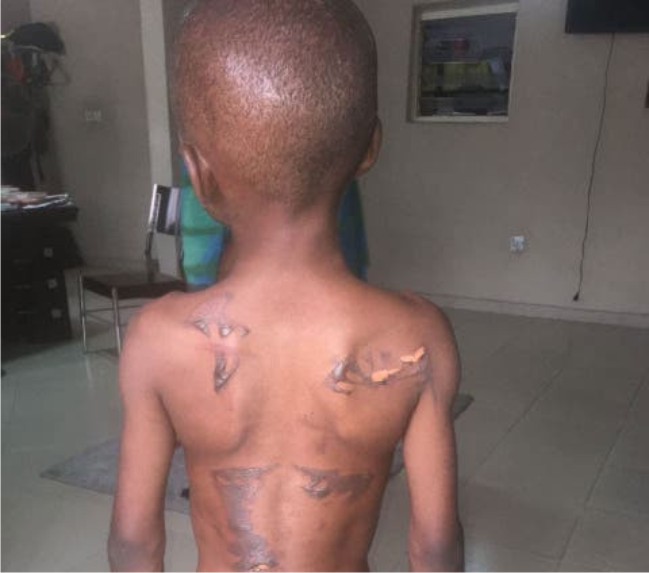 A woman has left the body her 8-year-old nephew scarred after she used hot iron to burn his body because he ate the 50 Naira groundnut she left in the house.

The incident happened at Anantigha, Calabar South, on Sunday, August 16, when the aunt returned from Sunday service to discover that the groundnut was gone.

She questioned the boy about it, then plugged in an electric iron and used it to burn his back and buttocks. When she was done, she refused to give him food.

Old scars on the boy’s burnt fingers also revealed that it isn’t the first time she has abused him since he started living with her about three years ago.

Speaking with Vanguard on Monday, August 17, the Principal Counsel, Basic Rights Initiative, James Ibor Esq., said they received a call from Girl Power Initiative, GPI, about a lady who had been assaulting her nephew with hot iron, burning stove and other hot objects.

According to Ibor, she plugged an electric iron and burnt the boys back and buttocks because he ate the N50  left-over groundnut and that was not the first time that such was happening.

He said: “From what the boy has told us, which is also very visible, he has been tortured and traumatised, and the boy is in serious pains. From here we are taking him to a medical facility where he can get adequate care.

“We have written to the Police and the state Ministry of Humanities and Social Welfare to enable us take good care of him in our own shelter home, because we cannot allow the child to go back to the aunty again.

“We have also invited the father, because the mother is late. Further actions can be taken as he and two of his siblings live with the said aunty.

“It is unfortunate that this kind of dastardly act and injury can be inflicted on a child. Even if he ate the groundnut, there is no justification for this kind of wickedness.”