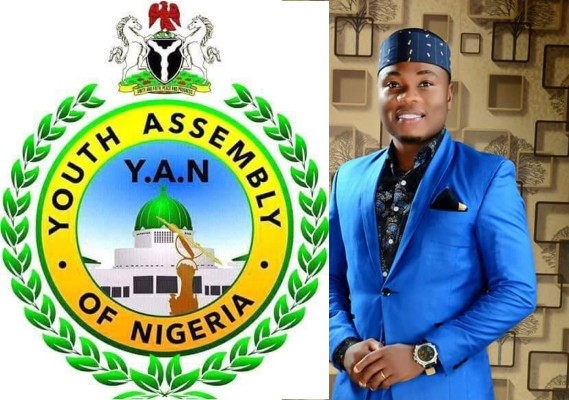 SENATORS-ELECT CAN’T ELECT A SENATOR-ELECT AS PRESIDENT OF THE NIGERIAN SENATE
…Says only duly inaugurated senators can contest for principal offices of the Nigerian senate.

The national speaker of Youth Assembly of Nigeria (YAN), His Youthfulness, Rt. Hon. Godstime Chukwubuikem Samuel this afternoon at the premises of the National Assembly, Abuja cried out over what he termed BREACH OF PROCESS FOR ELECTING PRINCIPAL OFFICERS OF THE NIGERIAN SENATE.

Godstime while addressing men of the press stated that only duly elected senators of the Federal Republic of Nigeria have the power to elect principal officers of the Nigeria’s senate and not senators-elect.

“Senators-elect are not qualified to nominate, vote or be voted for at the senate chamber for any position recognized by the constitution of Nigeria,” he said.

Godstime also opined with facts that only a duly inaugurated senator of the federal republic of Nigeria can contest for principal office in the Nigerian senate.

“Neither, Ahmed Lawan nor Ovie Omo-Agege was sworn in as a senator to enable them contest for a principal office. The Clerk of the Senate should do the needful so as not to turn this directionless attitude into a norm. We are serious about our quest to learn from members of the House of Representatives and Senate so we will not agree to be misled in any guise,” Godstime exclaimed.

“We will be heading to court to challenge the process if our observation is not taken serious by the clerk of the National assembly.”

Many great Nigerians of repute within the national assembly premises who listened to the interview of the YAN national speaker agreed with his opinion.

As at the time of filling this report, Hon. Godstime was preparing a letter of observation and immediate attention addressed to the clerk of the national assembly and copied to the presidency.