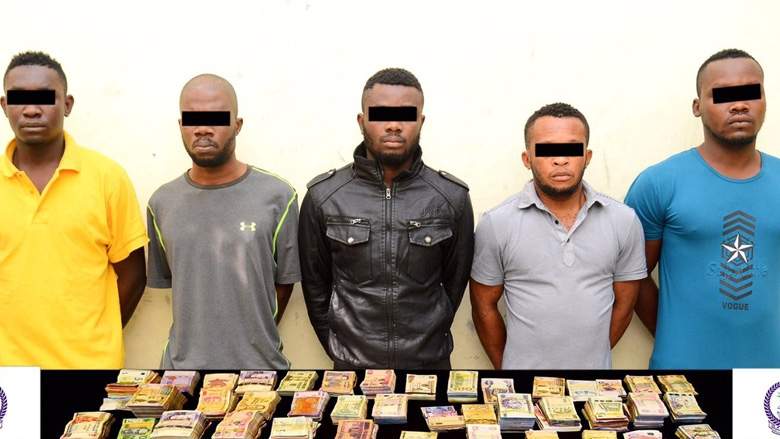 Eight Nigerian men have been sentenced to death in Sharjah, United Arab Emirates (UAE) for a string of robberies at money exchanges and cash machines (ATMs) across the Emirate.

A ninth Nigerian was found innocent. He was, however, sentenced to six months imprisonment for being in possession of stolen monies. he will be deported shortly after serving his jail term.

The Gulf News, a local news platform reported that the Nigerian denied the charge against him and said that one of the accused’s brothers asked him to transfer Dh60,000 to an account in Nigeria.

It was gathered that a total of 20 suspects were initially held for attacking security guards in four violent attacks at ATMs and money exchanges across UAE in late 2016. Out of 20 suspects, only nine were convicted.

Some of the accused confessed to their crimes while others denied the charges levelled against them.

The eight-member gang were said to have attacked security trucks and entered establishments by force and threatened and assaulted staff and members of the public with bladed weapons in a spate of robberies, three of which were carried out on the same day on December 18, 2016.

The gang — who were all in the UAE on visit visas — were said to be highly organised and plotted a string of orchestrated attacks to ambush security trucks that were transporting money boxes to and from ATMs, and at least one money exchange in Sharjah.

The first robbery took place at a Dubai Commercial Bank ATM on King Abdul Aziz Street where Dh340,000 was stolen. Then two days later they attacked an ATM in Al Safeer Mall in Al Nahda fleeing with Dh700,000, and an ATM in Muweilah where they stole Dh710,000. A fourth attack at a money exchange office near National Paints was foiled by police.

The gang of 20 were arrested in record time but police confirmed that only a portion of the stolen money — almost Dh1.8 million — had been recovered, as the gang members had divided the money among themselves and transferred it to their home country.

A prosecutor told newsmen on Thursday that as per the law, a group of people who threaten the life of others while committing robbery are subject to the death sentence, however an appeal is expected to be launched and the sentences could get downgraded to life imprisonment.

The trial appears unconnected with the arrest of five Nigerians in March this year, who robbed a Bureau de Change operator of Dh2.3 million (N225.4 million) in Sharjai, Dubai.

The Gulf new and KhaleejTimes, the local news platforms that have been following the trial did not mention if the recently arrested five Nigerians were among the convicted.

The five Nigerians reportedly barged into the BDC on March 20 and smashed the glass barrier between the customers and the staff, stole the money in multiple currencies and fled.

A top police official said the suspects came to the UAE on visit visas on March 18.

This comes on the heels of the execution of another Nigerian lady over drug trafficking in Saudi Arabia. 23 others are on death roll in the Arab country for drug related offences.

1 thought on “8 Nigerians sentenced to death in UAE”