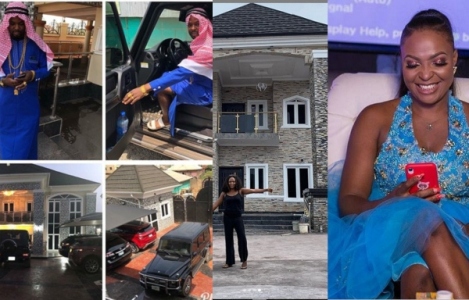 Relationship expert and blogger, Blessing Okoro has admitted lying about a new house she flaunted on social media as hers on her birthday. She had shared few days ago that she built the house 8 years after her ex-husband threw her out of his house.

8years ago my ex husband threw me out of his 1 bedroom apartment.
8years later I built myself a 7 bedroom duplex….
I picked up all the stones he threw at me to build myself
I became too strong and fortified.
I became that broken pieces that because an expert in mending .
Yes dreams do come true .
My name is Okoro Blessing Nkiruka

Following the post, the real owner of the house who is based in China sent a voice note to Instablog in which he called the blogger “stupid” for using his house to deceive people on Instagram. Read that here.

The voice note also revealed that Blessing only went to the house to take pictures and proceeded to the uncompleted house beside it to take another picture which she passed across as “before and after” pictures.

Well, with the growing revelations, Blessing’s show off had obviously being busted so she decided to come out with the truth.