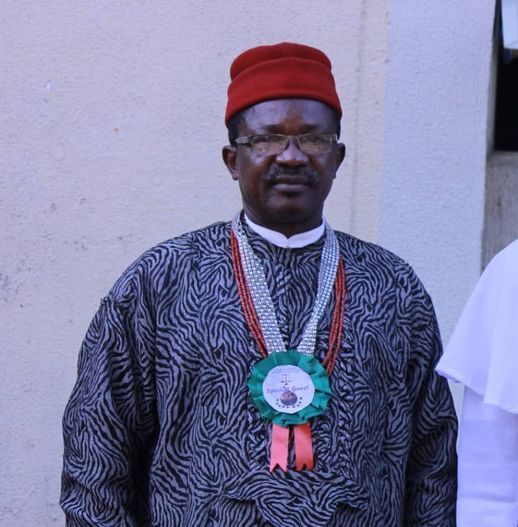 The brutal killing of three traditional rulers in Imo state on Tuesday evening, October 19, shocked many within and outside Imo state.

The ugly incident happened when unknown gunmen stormed the Njaba local government council headquarters and opened fire on the traditional rulers who were having their stakeholders meeting.

At least three monarchs have been reported killed, while many others were left with different degrees of injury.

Taking to social media, Jones FCC Onwuasoanya, a popular Imo state political commentator, analyst and Deputy National Youth Leader of Ohanaeze Ndigbo, penned a glowing tribute to Eze A. A. Durueburuo of Okwudor, one of the traditional rulers killed during the open fire.

Onwuasoanya, after recounting how he met the murdered royal father years ago during a research project, prayed:

“If the dead pray and if incantations of the living do truly get to the dead, I will implore you, dear good king, please, tell our ancestors that some of our sons have taken it as a kind of sports to kill our brothers, steal our young children for rituals and destroy an economy we built. May your blood torment those who sponsor these killings, those who plan these destructions and those who stay where these plans are hatched and refuse to speak out. May those who hail them see hell, unless they repent.”

Read the full article below.

It was about twelve years ago when I just completed the compulsory waste of time called National Youth Service and I was in Owerri, looking to ensure that I didn’t lose complete track of my love for writing and I told Emeka Nkwoada, who was then the editor of Announcer Express, to give me a column in the newspaper. He told me he would give me an assignment first, to know if I could do what I am applying for. He told me to do an investigative story for the newspaper and suggested that I investigate the culture of Okwudor people of Njaba that forbids a married woman from having an affair with another man.

That seemed an easy call because I had wonderful friends from Okwudor and have heard about the nso Ana, that I feel it’s too patriarchal and unfair to the womenfolk, because while the woman is forbidden from having a sexual affair with another man, the husband can go about philandering without repercussions?

I spoke to a few people from Okwudor and was led to know that it wasn’t a taboo of the Okwudors alone, but some other sister communities around the LGA and even up to Enugu also maintain that taboo. That was my first close encounter with His Royal Highness Eze A.A Durueburuo, a refined gentleman, educator and grounded traditionalist. He put me through on some of my curiosities about that culture and even veered to other things about the Igbo traditional institution. He asked me about myself and encouraged me like a father would. That story was the lead for Announcer Express that week.

Before that encounter with him. I had heard a lot about Eze Durueburuo through my long-standing friend and professional colleague, Kuriousk Kuriousk . He was not the average traditional ruler or lawyer, he was that kind of man you could look up to as a young man and you could be guaranteed of any support he could render to you without asking for anything in return. He was a man who believed in justice and equity and he had great passion for supporting talents and assisting young men to the attainment of their goals, within his own resources and contacts. He wasn’t the type that would withhold an information that he knew could be helpful to any youth.

My next encounter to him was around the 2019 elections. There were people who were hell-bent on stopping Uju Onwudiwe’s reelection bid, especially in Okwudor. As a traditional ruler, he played the role of a father to all, he never allowed loud sentiments passed off as popular sentiment to sway him either left or right, but he remained the center of balance whose interest was the peace and development of his community.

Eze Durueburuo was not just that traditional ruler whom Nature bestowed a crown on, but a well-bred leader who, even though was born a king, dedicated resources and time to sharpening his leadership skills and broadening his world views. He had many essentials of life taken care of by Providence for him, even before he was born, but my few interactions with him and the words I hear about him from people who knew him deeply and whom o know not to be too generous with praises, show him as a man who genuinely cared for the betterment of the youths.

If half, the traditional rulers in Imo had a mind, had the knowledge, trained their temperaments and worked as hard as he did for the good of his Community, maybe, the Traditional Institution would have enjoyed more dignity. But, make no mistake about it; Eze Durueburuo wasn’t killed because of the disdain for our traditional institution, he was killed by terrorists, who have no regard for anything, bloodthirsty hooligans who have no idea about what they are doing, drug addicts, who are brainwashed, terrorists, who get their inspiration from outside our cultures, criminals hiding under some agitations to destroy our land.

Yes, Eze Durueburuo has been sent home to the forebears of Okwudor, and he was accompanied by at least one other traditional head. That’s more than one custodian of our cultures and values sent home by hooligans who do not know what curses they bring upon their generation.

If the dead pray and if incantations of the living do truly get to the dead, I will implore you, dear good king, please, tell our ancestors that some of our sons have taken it as a kind of sports to kill our brothers, steal our young children for rituals and destroy an economy we built. May your blood torment those who sponsor these killings, those who plan these destructions and those who stay where these plans are hatched and refuse to speak out. May those who hail them see hell, unless they repent.