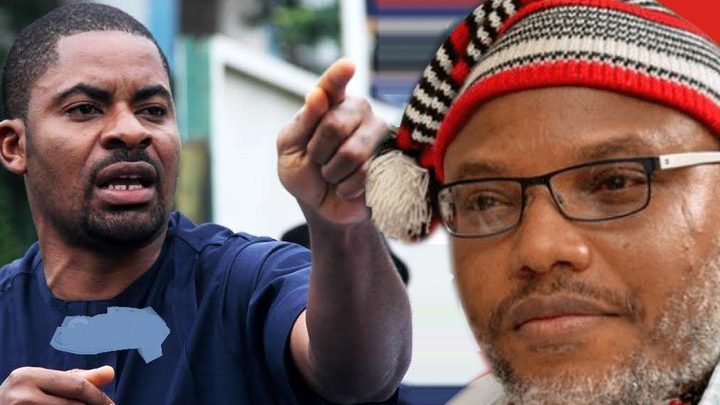 Deji Adeyanju, a popular Nigerian activist and former spokesperson for the Peoples Democratic Party (PDP) has claimed that the leader of the Indigenous people of Biafra, Nnamdi Kanu was tricked into a peace meeting and subsequently arrested.

Kanu was arraigned in court on Tuesday afternoon by Nigerian authorities after being on the run since 2017. He is facing charges of treasonable felony.

Adeyanju wrote on Twitter: “Someone high up in Govt told me they used a guy, a politician Kanu trust to deceive him to come for peace talks & arrested him in one of the African countries.

“You will recall Buhari even made comments that IPOB should give peace a chance.”

According to Nigeria’s attorney-general, Abubakar Malami, Kanu was arrested by Interpol and Nigerian security agents. Justice Binta Nyako remanded the fugitive secessionist leader in DSS custody until July 26th for a continuation of his trial.

Former Presidential aide, Reno Omokri has also stated that Nnamdi Kanu was not arrested or extradited by the British government. Omokri said:

”I just spoke with a top UK government source. Nnamdi Kanu was NOT arrested or extradited by the British. According to this official, Kanu was “almost definitely arrested in KENYA” and “it was an illegal detention”. I won’t reveal my source, but I have him on record.

“For those who do not know how these things operate, the United Kingdom is a civilised nation that is governed by the Rule of Law. No one, no matter how wanted, can be arrested and extradited without extradition hearings before a court, especially when that person is a British citizen.

“There are Nigerians who are currently fighting their extradition to Nigeria in court in the UK. They cannot leave the UK on their own volition or on the request of the Nigerian government until their hearings are exhausted. If they lose at the court of first instance, they have a right of appeal.

“I repeat, Nnamdi Kanu was not arrested or extradited by the British government.

“Also, it is a lie that he boarded a plane and came to Nigeria by himself. That is just propaganda.”

1 thought on “Just In: How Nnamdi Kanu was tricked into a meeting, arrested – Adeyanju”