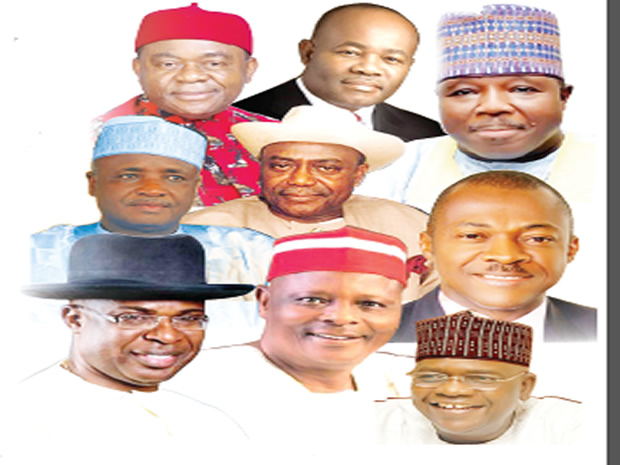 In this piece, ENIOLA AKINKUOTU and TOBI AWORINDE report that the conviction of former Governor Orji Kalu of Abia State raises questions on pending graft cases

The trial of former Governor Orji Kalu of Abia State for fraud finally ended a few days ago. Interestingly it lasted 12 years and on the 12th month of 2019, he was sentenced to 12 years imprisonment.

Apparently Kalu’s conviction trended both in the traditional and social media for two reasons: Many Nigerians, especially his political rivals, had before then believed that he was untouchable due to his perceived close relationship with President Muhammadu Buhari. Secondly, being a serving Senator and the current Chief Whip of the Senate, as well as an influential member of the ruling All Progressives Congress from the South-East, most people already concluded that his ‘sins had been forgiven.’

However, The PUNCH reports that aside Kalu, who will face the chastising whip of  the Economic and Financial Crimes Commission, there are nine other former state governors that the anti-graft agency similarly accused of corruption, which have yet to have their day in court. They are Theodore Orji, Timipre Sylva, Godswill Akpabio, Aliyu Wammako, Ali Modu Sheriff, Rabiu Kwankwaso, Peter Odili, Danjuma Goje and Sullivan Chime.

Orji, who was the Chief of Staff to the convicted Kalu, succeeded the latter in 2007 and ruled till 2015 before becoming a senator.

On November 21, 2018, T.A Orji, who represents Abia-Central Senatorial District at the National Assembly, was invited over allegations that he mismanaged about N27bn during his tenure as governor. The invitation, it was learnt, was sequel to a series of petitions written against the former governor shortly after he left office in 2015.

He was accused of diverting billions of naira disbursed to Abia State by the Central Bank of Nigeria for Small and Medium Enterprise.

The lawmaker was also alleged to have diverted money from the Ecological Fund account, which should have been used in tackling erosion and other disasters peculiar to the state.

Orji allegedly diverted money from the Abia State Oil Producing Development Area Commission, a government agency set up for the development of the oil producing areas in the state.

No charges have been filed against Orji till date.

Timipre Sylva, who is now the Minister of State for Petroleum Resources, governed oil-rich Bayelsa State between 2008 and 2012.

According to the EFCC, the former governor, alongside one Francis Okonkwo, Gbenga Balogun and Samuel Ogbuku, allegedly conspired and used three companies – Marlin Maritime Limited, Eat Catering Services Limited; and Halloween-Blue Construction and Logistics Limited – to launder about N19.2bn.

The money was allegedly diverted from the coffers of Bayelsa State between 2009 and 2012, under the pretext of using it to augment the salaries of civil servants in the state.

The court case against Sylva commenced in 2012 when the EFCC, through a motion filed by its lawyer, Mr Festus Keyamo (now Minister of State for Labour and Employment), sought for an interim order for the forfeiture of 48 houses allegedly belonging to Sylva, which was granted by Justice Mohammed.

Keyamo was also pursuing a separate N6bn fraud case against Sylva before Justice Evoh Chukwu of the Federal High Court, on behalf of the commission.

Sylva subsequently filed a motion challenging the competence of the fresh suit, describing it as an abuse of court process.

Keyamo was asked by the government to withdraw the matter so that all the charges could be consolidated. He complied and the case was struck out.

The PUNCH learnt on Sunday that the inability of the EFCC to serve Sylva’s co-defendants had caused a setback in upturning the 2015 judgment.

Documents obtained by The PUNCH showed that the case, with number CA/A/808C/2015, has been pending before the appellate court since December 22, 2015.

About 48 houses allegedly seized from Sylva have since been returned to the minister.

A former Governor of Gombe State, Senator Danjuma Goje was arraigned in 2011 shortly after the end of his eight-year tenure.

The witnesses called by the EFCC included officials of the Central Bank of Nigeria, the Universal Basic Education Commission, officials of the Gombe State Ministry of Education, executives of Zenith Bank and Access Bank and operatives of the EFCC.

Goje and four other accused persons were being prosecuted before Justice Babatunde Quadri of a Federal High Court in Jos.

They were arraigned on charges of conspiracy, money laundering and embezzlement of funds belonging to the state government.

He was accused of diverting N5bn from the government’s treasury under the guise of contracts for the supply of dictionaries and food.

On March 22, 2019, the court ruled that he had a case to answer and should proceed with his defence.

However, in May 2019, while Goje was running for President of the Senate, he met with President Buhari and was advised to step down for Senator Ahmad Lawan who eventually became Senate President.

Shortly after, the case was mysteriously taken over from the EFCC by the Attorney-General of the Federation and subsequently dropped, sparking outrage from a cross section of Nigerians.

Although Goje’s case has been withdrawn, he is still subject to prosecution if the government pleases since he was not acquitted.

The self-acclaimed ‘uncommon transformer’ has been under probe by the EFCC since his eight-year tenure ended in 2015. Akpabio, who was a governor of the oil-rich Akwa Ibom State, was accused of mismanaging N108bn belonging to the state and was quizzed on October 16, 2015.

The anti-graft agency also extended its investigation to the accountant-general, the auditor-general, the Speaker and the clerk of the House of Assembly.

Following the allegations, the Akwa Ibom State Government refused to cooperate with the EFCC and took the commission to court and obtained an interim injunction, restraining the EFCC and other Federal Government agencies from probing its finances.

Akpabio, amid the allegations, defected to the All Progressives Congress and met with President Muhammadu Buhari in London, a photo of which went viral on social media.

At his grand welcome rally in August 2018, Akpabio said the anti-graft agency had cleared him of all corruption charges.

“Those petitions to the EFCC have been sorted out. As I stand today, I have not been charged to court because nothing was found against me,” Akpabio said.

The EFCC, however, responded through its spokesperson Wilson Uwujaren that the cases against Akpabio hadn’t been closed.

“The EFCC does not close cases or give clearance to anybody,” Uwujaren had said.

Akpabio was in July 2019 appointed the Minister of Niger Delta Affairs by Buhari. No charges have been filed against him till date.

Senator Aliyu Wammako was governor of Sokoto State from 2007 to 2015.

Wammako, who represents Sokoto North, has since 2015 been under probe by the EFCC for alleged N15bn fraud.

The senator, who is the Vice-Chairman of the Senate Committee on Anti-Corruption and Financial Crimes, was accused of diverting public funds.

In an EFCC factsheet published last year by several media houses, the EFCC said that at least N1.7bn had been traced to the personal account of the ex-governor.

The fact sheet read in part, “Several petitions were received against Wammako for alleged theft and laundering of state funds amounting to N15bn.

“The EFCC in the last three years took time to look into some of the petitions and verified a few facts. Investigation has so far traced N1.5bn to the personal account of Wammako, which was deposited by individuals (suspected to be staff of the Government House, Sokoto) who have yet to be traced.

“The cash deposit was made between 2012 and 2015. The ex-governor will be invited any moment from now for interaction.”

Wammako, who led President Muhammadu Buhari’s campaign in Sokoto State in the last elections, has not been charged to court till date.

The case of former Governor Peter Odili of Rivers State is, perhaps, one of the biggest conundrums facing the EFCC. Odili, who was governor of Rivers State from 1999 to 2007, is married to Justice Mary Odili, a Supreme Court judge.

The 71-year-old politician first came under probe towards the end of his administration in March 2007.

The ‘Interim Report of the EFCC had stated that “over N100bn of Rivers State funds have been diverted by Odili and contained serious allegations of fraud, conversion of public funds, and money laundering, among others.

Odili, as the sitting governor of Rivers State, had approached the Federal High Court in Port Harcourt in February 2007, asking it to grant him an order preventing any law enforcement agency from arresting, harassing and prosecuting him for fraud.

On March 23, 2007, Justice Ibrahim Buba granted Odili’s prayers, including a declaration that the EFCC investigations were invalid, unlawful, unconstitutional, null and void.

The EFCC has been unable to vacate the court order in the last 12 years.

The EFCC had in 2016 announced that it was probing former Governor Sullivan Chime of Enugu State.

Chime, who was governor from 2007 to 2015, was accused of mismanaging the resources of the state and also receiving part of the N23bn allegedly shared by a former Minister of Petroleum Resources, Diezani Alison-Madueke.

The former governor subsequently defected from the Peoples Democratic Party to the All Progressives Congress.

Although many persons involved in the N23bn Diezani fund have been charged, there has been no update on Chime’s case.

The EFCC said in February 2016 that former Governor Ali Modu Sheriff of Borno State was still under probe.

He was arrested in June 2015 for alleged embezzlement of public funds during his eight years as governor of Borno State but was granted bail.

His government was said to have received over N300bn from the Federation Account between 2003 and 2011, an amount alleged to have been mismanaged by Sheriff.

Sheriff has since returned to the All Progressives Congress.

There has been no update regarding his probe and possible prosecution.

Former Governor Rabiu Kwankwaso of Kano State has also been under probe by the EFCC n the last couple of years.

In a fact sheet made available to the press last year, the EFCC said Kwankwaso was to account for how the 44 local government areas in Kano State were allegedly forced to contribute the N3.08bn to his Presidential campaign in 2014.

Each of the LGAs allegedly paid N70m each to Kwankwaso’s campaign in the presidential primaries of the APC.

The document stated that petitions alleged Kwankwaso diverted state funds to personal use. One of the petitions, against Kwankwaso was received from Mustapha Danjuma and Co and it was dated May 27, 2015.

Culled from The Punch