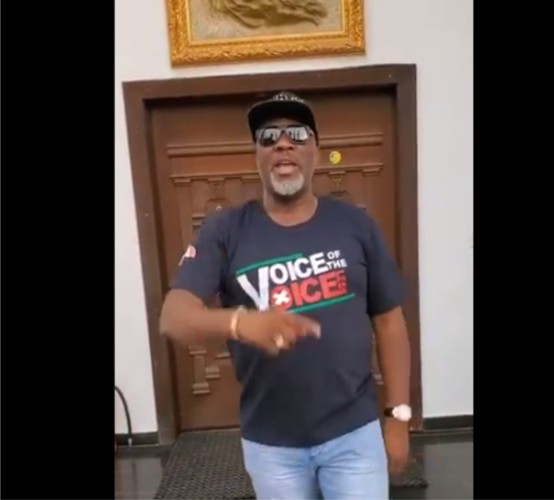 Embattled Senator, Dino Melaye has thanked God for not losing life and insisted that he won the Kogi West Senatorial election and that his conqueror, Senator Smart Adeyemi remains his political wife.

INEC’s Returning Officer of the election, Professor Olajide Lawal, had said Adeyemi, who represented the district from 2007-2015, polled 88,373 votes to beat Senator Dino Melaye of the Peoples Democratic Party (PDP) who scored 62,133 votes.

Melaye however said he will go to court, saying he believed he won the election, also adding that congratulating Smart Adeyemi is like congratulating an armed robber after a successful operation.

In series of tweets, Melaye said: “I want to specially thank God almighty that he preserved my life after 5 attempted assassination, combined forces of security agencies, INEC, Federal, State and LG powers. I was fought on land, in the air and spiritually. It was not about election but my life. God, I thank you.

“I will challenge the temporal and evaporative victory of Adeyemi at the Tribunal. Victory attain by violence and fraud is tantamount to defeat, for it is momentary. It is not about Dino MELAYE, it is about Nigeria and our electoral system. I stay the course, not over yet.

“The reaction of men and women of goodwill all over Nigeria, especially the wonderful people of Kogi west who truly voted for me is a testimony that God is with me and with us all. I won the election and Adeyemi remains my political wife. Thank you Nigerians. Victory is certain.

“The forces against me are not beyond God. People should not worry about me, I am fine and will always be. I just thank God that the plan to kill me did not succeed. A living dog is better than a dead lion. I thank God for life. My name is Daniel, I can not fall or fail.

Watch the video of the ‘undefeated’ Dino Melaye below.